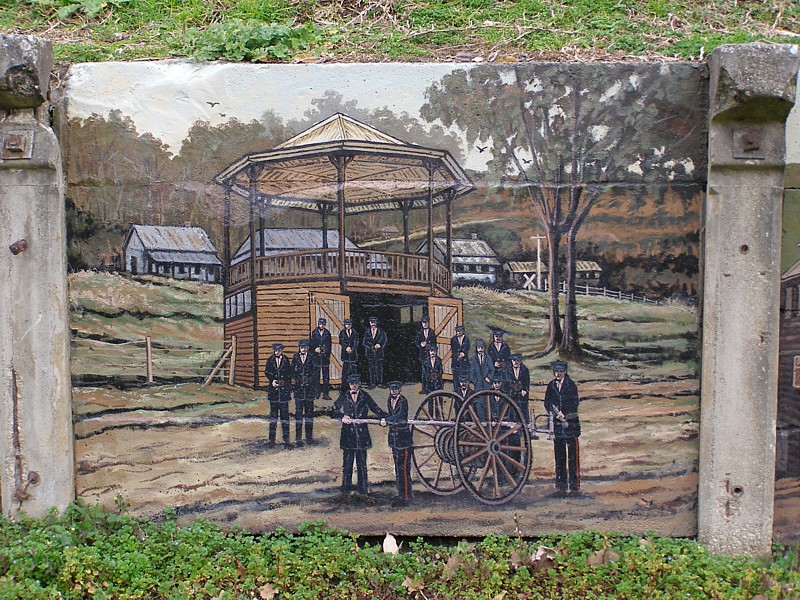 Friday 15th January 1915 -The Fire  Hose Reel and Accessories have arrived and all is in readiness for any emergency. The Officers of the Brigade have been elected as follows :- Captain F. Larsen, Lieutenant F.Taylor, Secretary W. Winstanley, Forman A. Griffiths, Members, W. Nankervis, K. Humberstone,     J. Quirk,  A. Janson, - Wilson, J. Murdock, R. Mattingley, H. Duscher, W. Orr, A. Jenkinson,  C. Buckten. Captain Larsen has his men hard at practice and the official opening will shortly be announced.

On 29th January 1915 - The Band Rotunda Opening - So that the whole building, Band Stand top floor and Reel Hose in the basement, may come into use at the earliest moment as it has been decided not to delay the formal opening.

5th February 1915 -  Mr J.F. Freeman President for the Progress League declared the Rotunda open and introduced to the audience the Lilydale Brass Band who had with true neighbourly spirit  accepted the invitation to spend a weekend at Warburton.  As they were well aware the major portion of the money for the building and equipment of the fire brigade was raised by a bazaar organised by the Progress League and opened by Madam Melba.

The League was most indebted to the people of Warburton and District for their most kind and generous support given at the bazaar and  to Mr Stockdale for his care and skilful supervision  of the building.  The Warburton people had such a useful ornamental and attractive building in their midst, also  the Railway Department was also entitled to thanks for the piece of land on which the building stands.