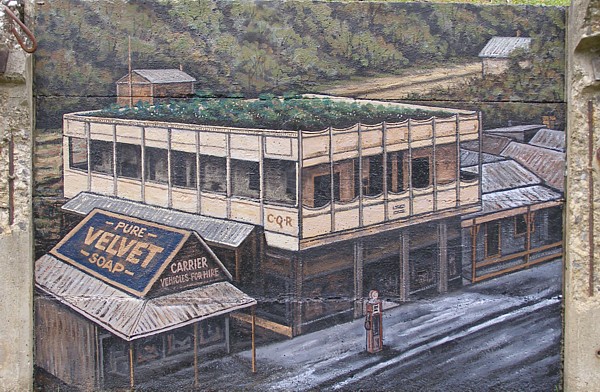 Mr Alfred Ottrey came to Warburton about 1918 and after a short stay, brought the local Hay and Corn store and the adjoining house located on the site of the present shop. With plans for the future of the site firm in his mind and showing remarkable determination and resolve, Alfred set about building the store while operating as a Hay and Corn store. Carting from the Railways  and delivering a 16ton railway-truck of chaff every second day on his horse and dray, he commenced the excavation work under the house.

He had all ready  branched out into hardware lines and while in the course of delivering his goods around the district, he would collect stone and bring it back to be crushed, most of the sand was also collected this way. The concrete was all mixed by hand using a coal scoop and girders for the building were put in place using a one and a half ton block and tackle secured to a pole.

Alfred's inventive method of lifting the concrete was by using a wire rope with a bucket attached to one end and his horse, Minnie, attached to the other. As the bucket filled, Minnie would move off pulling the bucket up to the pole hitting a board secured to the pole which would force the bucket to swing out then swing back, Minnie feeling the tension of the rope would then back up three or four paces allowing the bucket to descend onto the platform.  Henry,  Alfred's son would then empty the bucket and throw it off the platform, Minnie would respond to the sudden jerk by backing until the bucket reached the ground to be refilled.

The building was constructed around the house which was suspended on poles until the basement  and ground floor was completed, the house was then demolished.  Ever industrious during the construction of the building , Alfred was also carting soil to make a roof top garden.  He covered the entire roof to a depth of about one foot and also built two glass houses in which he grew grapes. Seven Bee hives were also kept on the roof. The building was completed in 1925.

Taken from the notes of Doris Ottrey