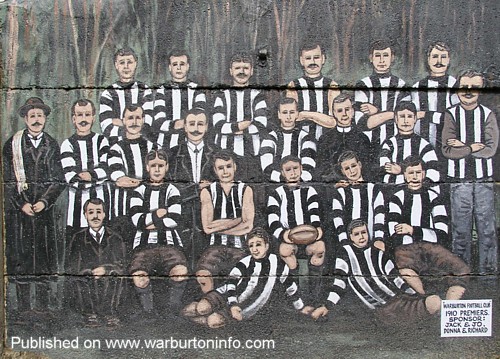 (Thanks Robin Fisher for this Information - Posted August 2013)

A meeting was held in 1895 in the Old Post Office Warburton for the purpose of forming a football club at upper Warburton.   Social matches were played, and in 1903 a League was formed with Warburton, West Warburton, Launching Place and Woori Yallock taking part but was short lived and it appears did not resume until 1907 when The Upper Yarra League was formed and  Trophy matches were played.  In 1909 The Yarra Valley League began with 6 teams, Warburton,  Millgrove, Woori Yallock, Lilydale, Yarra Glen and Healesville and players and supporters travelled by train to all matches and although successful  the League folded at the end of the year.

In 1910 the Upper Yarra Valley resumed with 4 teams  and Warburton won their first premiership with 25 Gold Medals to be presented to the players at the Warburton Footballer's  Ball.