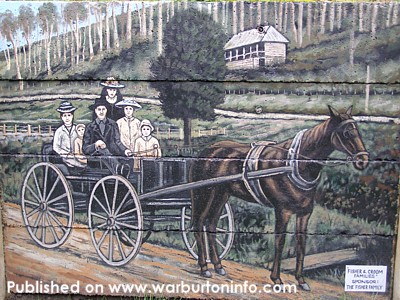 Back - Janet (Jessie) Fisher (nee Croom) holding niece Vera Croom  and  her daughter Mary Fisher standing, (they ran the Road House Guest House now the Arcade).  In front - Walter Fisher Jnr her son with his wife Christina Fisher (nee Cameron)  and nephew John Robert Croom. The children lived in the house on the hill in photo.  John Robert Croom  served in both World Wars and was killed in Syria 1941.

The Croom Family came to Yankee Jims Creek  ( now Old Warburton) about 1863 where their son John Gow Croom was born on December 27th of that year but registered in 1864 at Lilydale.  He  was the first white boy born at Warburton according to Victoria Pioneer Index.  As the gold petered out in what they now call Old Warburton, they moved down to the flat area of the Yarra river  in 1884. Upper Warburton as it was known then was settled in the middle of 1884 by John Croom and Family, his son in-law Walter Fisher and family and Son in-law John Thomas Robinson and  family.

John Croom took up land on the south side of the main road from the Church of England to the recreation reserve, subdividing it in 1886: John Thomas Robinson took up land from Scotchman's Creek to the Church of England, and built the first  Alpine Retreat Hotel:  Walter Fisher Snr and the sons and daughters   of the Croom Family held, on miner's right, all the land on the north side of the main road adjacent to the Yarra River from the laneway at the Gainsborough building to the Mechanics Hall, except for the Post Office block where the park is now, which was taken up by George Gray, the Post Master of that time, who came down from Old Warburton with them.  One by one these blocks were later sold  or taken over by the Crown.