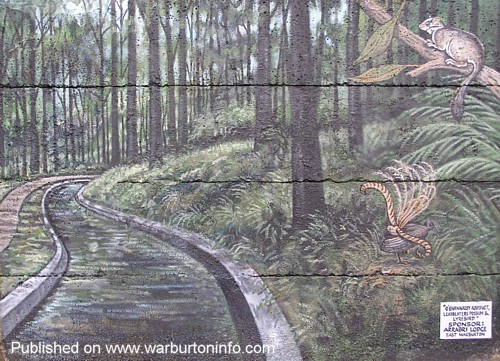 The O'Shannassy river scheme involved the diversion of the river by means of three concrete weirs at a point about 6 kilometres above its confluence with the Yarra River and from there delivering the water to Surrey Hills Reservoir via an aqueduct and pipe line, 78 kilometres in length. Contract was let in 1911 and the scheme was in operation in 1914. In 1924 during the course of construction of the O'Shannassy Dam, the MMBW  raised the sides of the open channel section of the O'Shannassy aqueduct and duplicated the pipe lines all in steel in order to increase the carrying capacity to 225 mega litres  of water per day.  In 1927 when completion of the O'Shannassy Dam was imminent the Board work force commenced work at Silvan and that Dam was completed in 1932.

The original intentions to make use of Upper Yarra water were taken a step further in 1929 when contracts were let for various sections of the Upper Yarra aqueduct. The aqueduct was completed in the early 1930's but because of the depression no money was available for seven connection syphons across creek valleys or for a connection across the  Yarra Valley from the basin at Starvation Creek to the O'Shannassy channel. This work was not completed until December 1939 when Upper Yarra water flowed for the first time via O'Shannassy  aqueduct into Silvan Reservoir.

After 80 years of service the aqueduct was deteriorating and after two large breaks, one in 1991 at Millgrove and the other near Donna Buang Road  Warburton in 1993, saw the closing down of the mighty water race that wound itself around the slopes of the great divide from O'Shannassy River to Woori Yallock and across the flats to Silvan . As one Melbourne Water employee put it "No more working through  the day and night with  storms, wind, rain and keeping the gratings clear of debris but then again it was an icon that surely will go down in history as a great achievement."