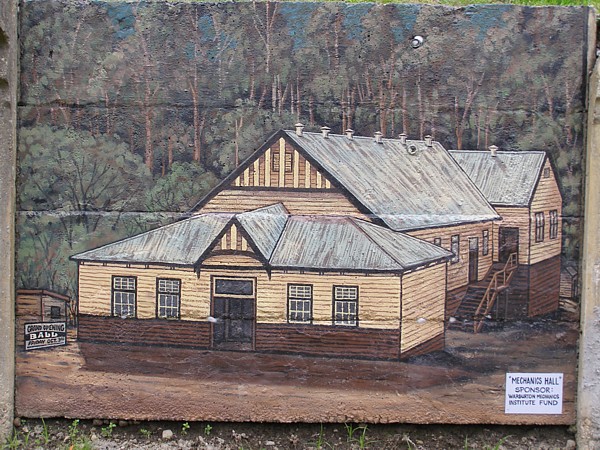 This beautiful mural sponsored by the Warburton Mechanics Institute Fund.

In the year 1886, a movement began in the little hamlet of Warburton to establish a public hall, the need of which had been felt for some time.   Several meetings were held and eventually the site was granted by the Lands Department for the purpose of erecting a Mechanic's Institute and the first public building was opened during the year of 1887. The hall had a very brief existence, being totally destroyed by fire in November 1896. The fire originated in a nearby hut and Mechanic's Hall was gutted.  All the documents connected with the hall were lost.

In January 1897 a meeting of the trustees and committee of management was held at the Alpine Retreat hotel, and, Insurance money on the old building having been paid, it was decided to build a new hall, the dimensions of which were to be 45  by 25 feet, with skillion roof.  In June 1897, when the Empire was busy celebrating the Diamond Jubilee of Queen Victoria, the new hall was opened.

By September 1900 there was enough cash on hand to adorn the hall with three coats of paint.

In 1911 the Upper Yarra Shire Council was apparently asked to consider the possibility of taking over the Mechanic's property, with a view to raising a loan to erect a Town Hall on the site; but nothing seems to have come of this bold venture.  By 1912, due to the railway, sawmills, etc., the town had grown considerably and the need for a larger building was felt.

Repeated representations had been made to the Government to facilitate raising a loan with the hall property as security and through the local member (Mr. Barnes) permission was granted.  Tenders for erecting a new hall were called for in April 1912. A grant of 100Pound was made by the Government, conditionally on a similar sum being raised locally, and soon subscription lists were opened.  There was such a ready response that the money was raised in a week.  The committee thus had about 300Pound in hand and after a little delay a loan of 700Pound was obtained from the Commonwealth Bank. Plans and specifications were prepared and the new building was commenced in June 1913.  The existing hall was jacked up, placed on timber trucks and moved bodily down the slope, where long poles were in position.  The structure was fixed securely on these poles, to form the stage of the new (the present) building.  Before the hall was finished the suitability of converting the space under the stage into a supper room was suggested and acted upon, a stairway being constructed leading to the upper hall.   The lower apartment, however, was not lined.

The new hall (lit by manufactured gas) was opened with a grand ball on October 13, 1913.  More than 300 were present at this function, a flashlight photograph of which is to be seen in the library today.   The committee at the time consisted of Messrs. E.A. Story (president) W. Bleakley (secretary), J.W. Nutley, W.J. Richards, H. Collings,  J.T. Robinson, C. Croft, D. McDougall, F.W. Mantock, W. Richards, and R. Croom.

It is filling a very useful purpose as a place of entertainment, to raise funds of which local organisations are in great need.  It also serves as a Court House, a convenient place for meetings, religious services, polling booth, etc., while the library contains several thousand books and is a great boon to its subscribers.